It was a bit of a slow week for new music, but Drake‘s got the lowdown on the latest from Spoon and Wilco, two of my former faves who haven’t really been in heavy rotation since the seminal “Yankee Hotel Foxtrot” and the balls out rocker “Girls Can Tell”. Sadly, I don’t think these two new releases are going to break the playlist slump (but with Spoon I’ll at least reserve judgement until I hear the full album). -ed.

It’s Independence Day this week and Wilco’s one of only a select few feeling patriotic with their releases. Meanwhile, while it’s only a three-song EP, it’s been awhile since we’ve heard from Spoon, so it’s definitely welcome news. Not a whole lot else, but there are interesting new releases from Moby, Wu-Tang Clan, Levon Helm and Amy Speace.

I often use the word ‘effortless’ to describe songwriting in a positive matter, so when I use it here to describe Wilco (the Album), it should be taken as mostly positive. But there’s something about the ‘effortless’ here that’s also negative. Wilco, and as principle songwriter Jeff Tweedy, have made a living swinging in and out of effortless songwriting, but their albums have had at least a portion of the album aim for something more ambitious than where they’ve ended up here. The name of the album and the opening track, “Wilco (the Song,)” even underscore the comfort and ease with which they’re working here. It works to their advantage with the aforementioned opening track and the George Harrison-referencing first single “You Never Know.” It’s hard not to think of the recent death of ex-Wilco member Jay Bennett and put in context with this release. Bennett is often credited with sparking Wilco’s experimental side, and with Wilco (the Album), that part of the band feels as dead as it’s ex-guitarist. 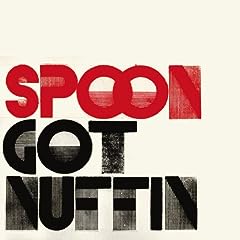 Placed within Spoon’s rich discography, Got Nuffin feels kind of insignificant, just a song and two “f*ckin’ around in the studio” tracks. But considering how long it’s felt since the last new release from the Austin (and now also Portland) band, the EP/Single is a most welcome event. “Got Nuffin'” may not rank with the best songs Brit Daniel has written, but it’s what we’ve got for now, so love it I must.