So the good news is, this is one of the more timely new release posts I’ve put in a while, the bad news is I haven’t really heard too many of the records below so there’s not much “Yin” to Drake‘s “Yang” this week (none, actually). Maybe I’ll catch up by listening to some of the (still) working album streams! -ed.

Saturday, July 11 was the first ever No Depression Music Festival, and it featured a slew of alt-country/americana acts, many of which were ina similar vein to this past week’s new releases. The week of July 7 brought us new records from Son Volt, Bowerbirds and the latest from Scott McCaughey’s The Minus Five.

The Minus 5 – Killingsworth
Stream / Purchase [mp3] 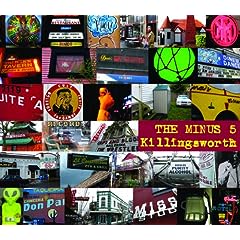 At one point, during standout track “Ambulance Dancehall”, Scott McCaughey delivers the line “Burn bright and leave a beautiful tail,” a phrase that’s as far from the Kevin Bacon of the Northwest music scene. McCaughey is akin to a sure and steady light that leaves an endearing shamble of a tail. This latest endeavor, like past releases, features Peter Buck but also members of The Decemberists backing him, and the result is a breezy and relaxed country rock affair, with McCaughey’s dry wit intact. And it has a song ostensibly about Scott Walker (“Scott Walker’s Fault,”) so of course it’s my pick for the week.

And if the album feels more laid back than usual for McCaughey, it might be that his other band, long-time Seattle faves Young Fresh Fellows, is releasing an album concurrently. With Robyn Hitchcock turning the knobs, YFF’s first album in nearly eight years is their most focused. It’s been far too long since I heard drummer Tad Hutichison’s driving beat and Kurt Bloch’s melodic leads, so even if I Think This Is occasionally falters, on the whole, it’s a welcome sound to the ears.

From the beard-rock wing of the Americana sound comes Bowerbirds second album Upper Air. They spend a little less time navel-gazing this time, already putting it ahead of their fine enough debut (Hymns for a Dark Horse). It’s both wild-eyed and backwoods, comfortable in moving from rustic folk to exhilerating orchestraton… could end up being my favorite acoustic-based album of this year.