It’s a big week in terms of quantity and quality, but next to Spoon, I know nothing makes Drake‘s week like a new release from Dan Bejar‘s Destroyer. -ed.

While last week was the first bonafide release day of the year, this week marks the first mother lode drop of 2011, including what many are already designating the album of the year in Destroyer’s Kaputt. Besides that, there’s Gang of Four‘s first album of new material in 16 years along with the latest from Iron & Wine, Deerhoof, Lila Ices, John Vanderslice, Sic Alps, Fujiya & Miyagi, Wanda Jackson, Thank You, Ben + Vesper, Say Hi, Delicate Steve, Phil Manley, Apex Manor, Cloud Nothings [pauses for breath], a nice Light in the Attic compilation for Vagrants and a yawn-worthy cash grab attempt from Cold War Kids. 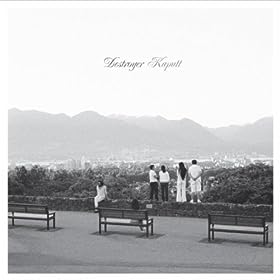 Without warning, the first dip into Dan Bejar’s tenth album as Destroyer can be shocking. The associations saddled to the 80s sound that Bejar employs for his latest poem soundtrack are mostly bad hair, bright suits and cocaine. But after a couple listens, with help from the soulful vocals of Vancouver native Sibel Thrasher, an effects-laden trumpet and Bejar’s signature couplet tossing, the uneasy feeling becomes something something quite transcendent.

Bejar lists Roxy Music’s Avalon and the arrangements of (Canadian born) jazz pianist Gil Evans as his influences for the music of Kaputt (a title borrowed from an Italian novel he confesses to have never read), and the tousled-hair troubadour even recorded the vocals while lying down on a sofa to further relax the setting. Besides Avalon and Evans, Kaputt had me searching my library for recordings from Style Council, Talk Talk and especially the Thomas Dolby produced tracks from Prefab Sprout (Steve McQueen aka Two Wheels Good). The album ranks with Streethawk: A Seduction as Bejar’s magnum opus. As usual, no matter your association with the music, the lyrics are the real show, and Bejar obliges with several lines that help encompass the album and act as an aide for lazy reviewers (guilty!).

“I write poetry for myself.” and “I sent a message in a bottle to the press.
It said, ‘Don’t be ashamed or disgusted with yourselves’… I’ve thumbed through the books on your shelves.” (from “Blue Eyes”)

“Wasting your days chasing some girls, alright/ Chasing cocaine through the backrooms of the world all night.” and “Sounds, Smash Hits, Melody Maker, NME, all sound like a dream to me.” (from “Kaputt”)

I previewed Kiss Each Other Clean a couple weeks back, but since then I’ve gotten to be quite cozy with the latest from Sam Beam, aka Iron & Wine, and perhaps it deserved some more virtual space. Besides being a continuation of the reinvention I&W took on with 2007’s The Shepherd’s Dog, KEOC shows Beam more at ease with the new tricks at his disposal with a bigger budgeted studio. More than just adding bass and drums, Beam is building a mosaic of sound to back his songs. Horns are even brought in to punch up some songs, but unlike Bejar’s use, they never seem to jive 100% with the concoction that Beam is trying to mix. It’s an intoxicating collection of songs, though, that rank with his best releases.

With album titles like Entertainment!, Mall, Shrinkwrapped and now Content, it’s hardly news to anyone that Gang of Four has always been taken with the concept of consumerism. Hearing the great “Damaged Goods” backing an ad for Microsoft’s Kinnect understandably threw fans for a loop, but it all feels part of this same fascination. Go4’s first album of new material in 16 years continues the trend, and Jon King and guitarist Andy Gill are still bitter about all the bands that have cashed in on Entertainment!‘s blueprint. The first half of Content is a triumphant return, the best they’ve sounded since 1981’s Solid Gold, but then the album kind of falls apart after that, never quite realizing the opening’s promise. It’s a solid enough return, though, that I hope King & Gill can keep the band together. Even without original members Hugo Burnham and David Allen, the new rhythm section (Tom McNeice and Mark Heaney) do well to make us forget the legendary talents.