Once again, without further ado, here is another installment of Drake’s Take. -ed.

Looking at upcoming release schedules, we’re probably looking at the last worthwhile week of new releases, headlined by the latest wild romp from Of Montreal, the solo debut from former Death From Above 1979 frontman Sebastien Grainger, and others including the latest from The Dears, +/-, Parts & Labor, Electric Six, The Dead Trees, Gary Louris, White Hinderland, Hank Williams III, Gang Gang Dance and Brett Dennen.

Coming off the confessional masterpiece Hissing Fauna, Are You The Destroyer? (broken down here,) it’s hard to listen to Kevin Barne’s Skeletal Lamping without putting in the context of it being reactionary. First, there’s the reaction to the Outback Steakhouse-related cries of sellout — Lamping‘s schizo-pop montage is anything but. There may be 15 songs listed running nearly one hour, but there’s probably a hundred song ideas connected musically here, with the ends of songs only marked by a change in how the lyrics are connect. 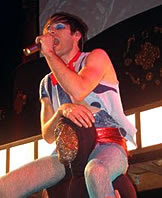 The biggest reaction, though, is related to how Hissing Fauna laid bare the painful separation and divorce from his wife following the birth of their child, and his hedonistic turn following. He’s since patched things up with his wife, but the album and it’s painful contents have been interpreted tenfold since, which has to be especially hard for Barnes’ wife Nina. This seems to be addressed in album’s opener, “Nonpareil of Favor,” with the initial salvo: “My lover, I’ve been donating time to review all the misinterpretations that define me and you. I’m thinking about you in my secret language…” and from there, it’s a thankful love song, until things begin to crack (“I’m cracking my sweet love,”) and then, like the latter half of Hissing Fauna, Barnes alter-ego Georgie Fruit takes over.

The middle-aged transgender soul singer launches “Wicked Wisdom,” by announcing “I’m a motherfucking headliner, bitch you don’t even know it!” and then the album begins to sound a bit like Prince at his most tripped out. Barnes has cited Sign O’ the Times, Lovesexy and The Black Album for being inspiration here, but I’d argue there’s a bit more Around the World in a Day and Controversy here as well, in both those albums were reactionary for Prince, much like Lamping is for Barnes (and, likewise, for it’s degree of difficulty / crazy genius moments outshining the overall tenor of the album as a whole).

If you’ll remember, it was during Hissing Fauna‘s “The Past is a Grotesque Animal” that Barnes eventually cracks and becomes the gener-bending sexual beast Georgie Fruit, and it’s Fruit who colors the rest of the album, for the most part. It seems Fruit is still dominating Barnes’ “southern hemispherical” here, as it dominates the album, acting as a nearly nonsensical proxy for Barnes, who seems burned out on confessionals. There’s a lot of great moments here, particularly the falsetto moments of “For Our Elegant Caste” (“we can do it softcore if you want, but you should know I take it both ways”) and “St. Exquisite’s Confessions” (“I’m so sick of sucking the dick of this cruel, cruel city” and “come and see there’s still some gentle people fucking to ‘Strawberry Letter 23’“). Aside from the many brilliant sexual riffs (ala Prince, again) much of Georgie’s musings ring hollow after awhile.

Another that kind of works (until if falls under the weight of it’s own twists and turns) is the sexually confusing “Gallery Piece” which captures the contradictions of love and lust cleverly: “I want to make you proud and play with your head. I want to take you out, make you feel adored and buy you everything. I want to hurt you bad, make you paranoid and say the sweetest things… I want to be your ‘what’s happening.'” Probably the catchiest song is “Triphallus, to Punctuate” (which I take to mean !!!) mostly for it’s Elton John-like chorus: “Guess I should be happy for you, for your success and all that.” But that’s only because “Plastis Wafers” wastes it’s catchy chorus with a corn maze of music (and sexual) dead ends, meandering along for more than 7 minutes.

Similarly, the song “Beware Our Nubile Miscreants” seems to waste golden lines like “he’s the kind of guy who would leave you in a k-hole to go play Halo in the other room,” and “you only like him because he’s sexually appealing, but his psychic’s prediction has him hanging from a ceiling…fan.. in eight months.” Because by about 2:30 into the song, it’s apparent that Barnes has moved on and is just looking for some way to connect it to the next song, and we’re set adrift for most of the song.

The one song grounded lyrically, is “An Eluardian Instance,” which under the umbrella of French surrealist Paul Eluard, seems to tell the story of how Barnes met his wife Nina in Norway: “I was a foreigner when you appeared, from the shadows of the Mono Club” and later “I asked your friend if you were available, she answered, ‘No, but yes, oh well, oh well, yes and no'”. It stands out here inversely the way the Georgie Fruit songs colored the margins of Hissing Fauna, reminding us once again of that masterpiece.

To be sure, this album is rare in that’s meant to be a ‘hate it or love it’ venture, but ends up being both, for the most part. Because of it’s refusal to stay in one place for long, it’s going to try the patience of many a listener, but over time, may prove to be the album that folks point to in their catalogue as their most overlooked. Only time will tell, but for now it’s an album to both love and be frustrated with (contradicting bits of love and lust much like “Gallery Piece”).

Remember when Dave Grohl came out with his Foo Fighters debut post-Nirvana?

I kind of liken this product to that, as it relies much more on classic rock than I would’ve assumed, feels like it shows great potential, and also feels completely unfinished. I want to like it more as I loved Death From Above 1979, but I can’t help but feeling that Grangier is on Grohl’s Foo Fighters track here, which may, in the end, make him a star (following that trajectory,) but leaves me a bit cold.