Another week, another short list of new releases filled primarily with gift-giving in mind. Wading through the wasteland of late year releases can bring a few plums, and this week sees Tom Waits‘ third live disc and a special reissue of a Drake fave from ’94 (Jawbox). Elsewhere there’s a new one from Tahiti 80, a compilation from Daptone Records and a live collection from Tom Petty & the Heartbreakers.

Tom Waits’ live shows have always been an event, so it’s no surprise that this live collection is so eventful. Casual fans will no doubt be dumbfounded by the lack of songs they recognize, but this collection more than captures the essence of last year’s carny-barker-as-tour that Waits put on. Bonus second disc is an edited together collection of the best of Waits’ between songs banter. Plenty of highs and lows that sound much better after a cocktail or two.

Jaw Box – For Your Own Savory Sweetheart (2009)
Stream / Purchase 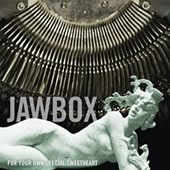 DC’s Jawbox put out several great albums on Dischord before jumping to the majors, a move which garnered them more than a few ‘sellout’ cries. But their major label debut was anything but selling out, instead an uncompromising and fiery statement. It’s been out of print for some time, so it’s reissue is a welcome affair. More than back in print, though, For Your Own Special Sweetheart gets packaged up with some great b-sides and even a sharp new cover. But that’s not all. Singer/guitarist J. Robbins always lamented that the album was missing a little bottom end, so super-producer Bob Weston was brought in to ‘lower the boom,’ as it were, and the result is amazing. FYOSS had plenty of oomph before, but now it hits even harder. And that’s saying something. The album is released today, but Jawbox will be celebrating it in a couple weeks, with a special appearance on The Late Show with Jimmy Fallon. Can’t wait to hear them rip through “Savory”…

More on the radar (and in the mp3 player) this week:
Tahiti 80 – Activity Center
Daptone Gold
Tom Petty & the Heartbreakers – The Live Anthology
The Brian Jonestown Massacre – The ‘One’ EP
Brett Anderson – The Slow Attack
The Brian Jonestown Massacre – The ‘One’ EP
Lady Gaga – The Fame Monster
The Princess and the Frog OST
Miles Davis – The Complete Columbia Album Collection / Free AOL Album Stream