Some of you may ring in the new year on January 1, but I choose the first official Drake’s Take of 2011 to kick off my celebrations. -ed.

The new releases for 2011 begins in earnest this week, and while there is nothing in the way of essential releases, there’s plenty to stop and check out while we wait for the real motherlode to drop in two weeks. The latest from Wire, British Sea Power, Cage the Elephant, Tapes n’ Tapes, Cake, The High Dials, Batwings Catwings, The Beets, Birds of Avalon and Broken Records all deserve at least a gander.

Ever since they reformed back in 2000, post-punk pioneers Wire have mostly eschewed “playing the oldies” and have instead kept original, alternating styles between chillier rhythmic anti-pop and a surprisingly melodic and, dare I say, warmer sound. Now with Red Barked Tree, Wire have merged the previous post-2000 output into a fairly melodic album that still rocks like it’s 1979. The opening track, “Please Take,’ is practically Adult Alternative, it’s so pop-oriented, which if you hadn’t followed the band’s progression/regression since their classic ’77-79 output, might be off-putting. It’s a bit of a red herring, though, as Wire spit icicles in your ear just a couple songs later with the abrasive spoken word, Stooges rumble of “Two Minutes.” Meanwhile, you might bounce along with “Bad Worn Thing,” but you’re immediately hit back with the next track, “Moreover.” In the end it’s Wire, and that is never boring.

It’s interesting to follow the above Wire album with BSP’s latest, as Valhalla Dancehall certainly shares the same post-punk roots. But where Wire like a more staccato artistic noise, BSP like to go BIG, and they do often with Valhalla, opening with two effects-laden guitar burners in “Who’s in Control” and “We Are Sound.” Throw in “Stunde Null” and it’s a tremendously promising opening. Unfortunately, after the album loses all momentum, instead meandering in effects and mood with only a couple blips of life in the latter third (“Observe the Skies” and “Thin Black Sail”) that aren’t enough to save it. It’s an ass-kicking EP stretched too far. 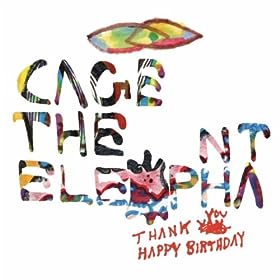 Kentucky’s Cage the Elephant surprised many with the success with their debut, but instead of a retread on what worked the first time, CTE brought more of their favorite sounds into play, namely the post-punk and noise pop of the early 90s. At times singer Matt Shultz swings dangerously close to the ground that similarly young Avi Buffalo tread (“Aberdeen”), but never stays in one spot for too long to get pigeonholed. While the album is generally on the loud side, they find a spot for a Beatlesque ballad in “Right Before My Eyes,” that’s bound to light a few iPhones in the dark on their tour.