Once again, Drake and I are up-to-date… for the time being. On a related note, I was really impressed with Pepper Rabbit at CMJ last year and I’m a big fan of their new album too. -ed.

Ahh… the dog days of summer. The weather is great… the releases, not as much. Making the most noise is Jay-Z + Kanye West interpreting Game of Thrones (ok, not really — but someone else was thinking the same), but we’re most interested in the sophomore release from Pepper Rabbit and a second EP from Worcester’s Dom. Also releasing new albums this week are Army Navy, The Irrepressibles, The New Mastersounds, Ursula 1000, The Birthday Massacre, Royce da 5’9″ and comedy albums from The State’s Michael Ian Black and WTF podcast’s Marc Maron. 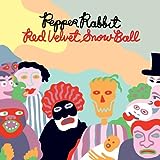 The Los Angeles (via New Orleans) duo Pepper Rabbit barely made a splash with their workman like pop debut Beauregard, and one could hardly be blamed for forgetting that it existed if not for the rapid turnaround for their sophomore release this week. Red Velvet Snowball presents an impressive leap for multi-instrumentalists Xander Singh and Luc Laurent, pulling back on the rock and introducing more experimentation with the instruments used. Singh, for one, took it upon himself to learn a host of new instruments, often relying upon YouTube videos for instruction. If done haphazardly, that could make for a claustrophobic affair, but each song was allowed to grow organically, calling for each instrument’s use and the end result is very lush. The psychedelic-tinged pop of “Rose Mary Stretch” is the obvious highlight, but there’s a lot more here to love, including the synth-drunk “In Search of Simon Burch.”

REISSUES
Against Me! – White Crosses/Black Crosses